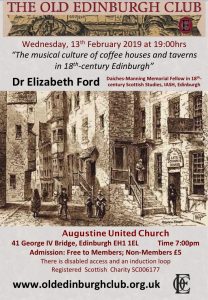 Taverns in Edinburgh in the eighteenth century performed a similar function to that of coffee houses in England: places for informal political debate, exchange of news, drinking, and informal music making. This talk will look at this cultural environment, with an emphasis on the musical gatherings in the Cross Keys Tavern, which led to the formation of the Edinburgh Musical Society.

Elizabeth Ford is the Daiches-Manning Memorial Fellow in 18th-century Scottish Studies at IASH, and one of the research assistants for the Royal Society of Edinburgh-funded Eighteenth-century Arts Education Research Network at the University of Glasgow. Her Ph.D. thesis on the flute in eighteenth-century Scotland won the National Flute Association’s Research Award.

There is access for the disabled and an induction loop at the hall.

View the location of the Augustine United Church on a map.

Lectures are free to members (please show Membership Card at the door) and open to non-members paying a small fee (currently £5.00).